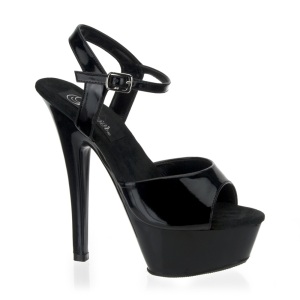 So starts My Summer Sandal Saga. I wanted needed a new pair of sandals a few months ago. I’m a bit of a hoarder in terms of clothes and shoes, once I find something I like I’ll wear it forever or until it literally falls apart. I have a certain style, a certain look and I really don’t find much in your average high street that I like, so I grab it with both hands when I do and then hang onto it! Having finally admitting defeat with a pair of fab wedge sandals with a row of black flowers as the single strap, I condemned them to the wardrobe in the sky and needed new ‘everyday’ sandals. You know, ones that would do for work and that I’d still get away with going out if the rest of me was a bit more dressed up.

By chance I happened upon a pair of such sandals in black patent with swishy crossover straps and they were even on sale at half price at a measly €35! What’s not to like about this? But they were the last pair left and they were officially a size smaller than what I normally take. Without so much as a second thought, I said to the sales assistant ‘I’ll take them!’ and next thing, me and my new purchase toddled off. Delighted with myself I was! So much so, I put them on and headed out again to meet friends 5 minutes after I got home. Now, these sandals don’t have much of a heel, maybe an inch and a half, practically flat for someone like me who loves how big, big  heels for the way they make me feel like a giant – I have 5inch Kurt Geigers that bring a tear to the eye. So they wouldn’t hurt, even though they’re brand new, right? END_OF_DOCUMENT_TOKEN_TO_BE_REPLACED

Posted in Me Likey Me No Likey

Oh I do like a nice military jacket! I have to say, it’s one of my favourite looks – sharp, edgy jacket with skinny jeans and boots with a heel just begs for a ‘I know I look great’ attitude. Back when I was a teenager in 1842 and not exactly living near Camden Market or the Portobello Road, there was a distinct lack of the kind of clothes I wanted to wear available in Smalltown. I did once resort to buying a man’s blazer in a charity shop and then fashioning epaulets out of gold material and sewing fringing that was actually meant for curtain ties into the kind of thing I wanted. I also managed to somehow find a gold brooch that resembled a type of battlefield medal and I looped some different gold rope-y kind of stuff that I also found in the local haberdashery store between one shoulder and the collar. Oh, I loved that jacket! And you couldn’t really see the sewing stitches unless you were really, really close up!

Nowadays however, Military jackets are pretty much a staple of manys the A/W collection. Oh you young ‘uns don’t know how easy you have it! I particularly like this one, pictured. From Laura Whitmore’s Impulse Bodyspray Collection, available in all A-Wear stores, this jacket ticks all the boxes! Great shape, big shoulders as seen everywhere this A/W, fab button detail and a not to be sniffed at price of just €70!

Wondering where you know the name Laura Whitmore from? Recognise the face? Laura’s currently an MTV presenter – ah, now you know her! – this is her first foray in fashion as the face of the Impluse Bodyspray Collection for A-Wear. I think she looks fab in these pics, mind, you’d need an awful lot of Elnett to keep that hair in place in Whelan’s at 2am on a Saturday night, but I can see many of you trying anyway!

This collection has been available in A-Wear since mid August and Impulse have also set up a ‘street blog’ where you can see pix of the more fashionable among us as they eh, wander down the street! Have a look and who knows, you might be posing for the blog soon!

Posted in Me Likey Me No Likey, SlebWatch

Does My Bum Look Big In This? 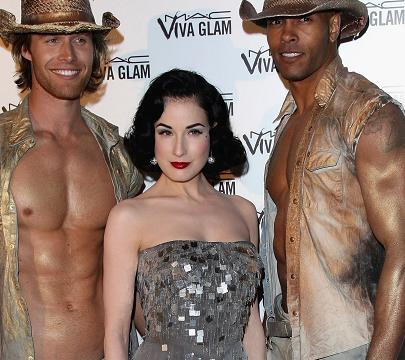 Last Sunday was a blast. It was one of those totally unplanned days that seemed to go on forever, without the knowledge of knowing what would happen next. It started out with McSmile announcing that we should go for brunch – eating out again and drinking during the day AGAIN was sure doing a lot for our plan not to spend the equivalent to the GNP of a small country per weekend.. for the ahem, second weekend in a row since we made the decision. We couldn’t decide where to eat as we strolled into town. The Mermaid Cafe ‘looked too busy’, there was ‘bound to be somewhere in Temple Bar, I ‘didn’t want to eat Mexican’ [Oh the thoughts! My stomach was still very delicate from the night before] and eventually McSmile had the brainwave of ‘Sure let’s just go to X and Y’s place!’, X and Y being friend’s of his that own a great cafe/restaurant in the city centre. Result!

X was there and within 2 minutes a window table was free and ours. As soon as we walked in I just knew it was going to be one of those giggly days that would go straight down the path to copious drinking and general ducking and diving. And maybe it was because we were really just topping up on the alcohol from the night before. X sat with us and started telling us about his recent trip to New Zealand which included getting stranded in the middle of nowhere after a cop took his hire car off him for speeding, a gorge swing from 109m, a ‘meet the parents’ couple of days, hardcore partying with a bunch of strippers and getting his hand bitten by a girl when he wouldn’t give her his drink [only one of these things happened when he was with his girlfriend, guess which one!]

‘Hey, do ye want to go to a fashion show?’ It’s like, I dunno, some kind of fashion show with clothes and girls and stuff. It’s an invite only thing, I’ve a couple of tickets. Says on the invite that there’ll be champagne’

Can you tell where this was going? I was lucky to be able to see at that point, having had a half bottle of vino and then a ‘Fuckit, order another one’ suggestion from McSmile, brought total alcohol up to a bottle of wine, by myselfand about 100 bottles of beer for McSmile. It was about 5pm. Yes, really.

We walked up the stairs, the guys having, of course, asked the poor guy on the door if there was any goody bags on offer and then promptly fell into glasses of champagne. There were rails of clothes and a makeshift catwalk boxed off by two straight lines of tea lights on the wooden floor.

‘So, like, is there going to be like a fashion show thing?, asked McSmile, ‘or do we just drink champagne and look at the clothes on the rails?’ as he walked across the makeshift catwalk, threatening to turn the tea lights  into skittles.

We perused the clothes, X went off and came back with three more glasses of champagne, the place fell silent and the curtains came back, the show was starting.

The first guy that walked out looked completely morto as he strutted his stuff to a whole gaggle of girls that were obviously mates of his standing right beside us. The next time he came out he looked very reassured to have a ‘real’ model by his side! It was clearly a mix of real and not real models as guys and girls of various heights and weights kept the show on the road for about 20 minutes. Not long into the show, the two lads started getting a bit excited about some of the clothes.

‘Yeah, think it would man, are ye like thinking of getting it?’

After the show there was a general descending onto the clothes rails. McSmile disappeared from my left, X from my right and I was just standing there until one of them called me,

‘Hey Glitter.. what do you think of this shirt? Kinda nice, huh?’

‘Glitter, Glitter, would this go with, y’know the jeans I have, the ones, ye know…’

‘But Glitter, should I try the shirt on? Might as well, huh?’

I was a little shell shocked and decided to put down my empty glass of champagne and sure I could spot that there was still some on offer so feckit, I picked up another glass. I turned around to ask the guys if they wanted another glass. There was McSmile, now sporting a baseball cap, the price tag dangling on his shoulder, he was standing in front of the mirror seeing how it looked with his RayBans that had been pulled out of his pocket. There was a girl from one of the labels talking to him as he turned this way and that, then she handed him a shirt and the two of them were utterly engrossed in conversation.

‘Glitter, so, well, what do you think? I’m not sure. I think I’m too tall for them, they need to be baggier to suit my legs.’

X had now tried on the combats he’d been eyeing up.

‘Hey Glitter! Come over here!’, McSmile needed some reassurance. ‘What about this belt? [Belt! He now had a belt as well!] Is it me though? I’m not sure…’

‘Yes Darling, it’s you, you should get it, really nice… btw, how much stuff have you tried on by now?

‘So Glitter, I’m thinking I won’t get the combats’, X was getting a bit disheartened, ‘But hey! I kinda like this shirt!’

‘Oi! Gerroff! I’m buying that shirt X! And you’re not getting one as well, try on the white one, the collar is really nice, it’d suit you!’

OMG. I was really having to try hard in order to keep a straight face. I had to wander off, pretend to be interested in some of the clothes on the other side of the room, so I just left the drunk little fashion bitches to it for a bit. Now, I too was fairly drunk but I wasn’t causing mayhem, trying on everything in sight and hogging the mirrors so no one else could get near them, I was just walking around in my own champagne haze until I heard my name,

‘Glitter! There’s some jewellery over here!

‘OMG! how much are you actually buying?

‘Well, the shirt, the other shirt, the belt, I’m not sure about the jeans… I’m still deciding on the..’

‘Glitter, I decided to get the white shirt after all, McSmile reckoned I should…’

Oh god, I ended up roaring laughing at the two of them and they laughed as well. And then we celebrated a great afternoon by stumbling across the road to another pub. I’m a bit unsure about things after that.