The Glitterati are a very, very important part of life Chez Glitter – meet Missy and Pinky!

Who went from this at 6 weeks 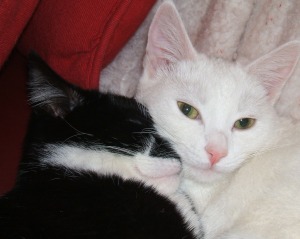 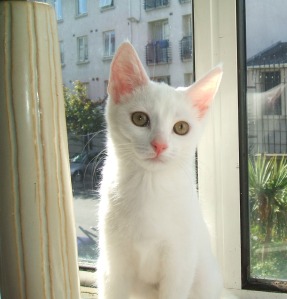 M: I get called Monkey – but I don’t know what a monkey is..

P: Well at least you don’t get called Pinkypoo! Imagine, Pinkypoo of all things.. doesn’t do my rep any good, let me tell you!

Where do you sleep?

P: I sleep where I want!

M: I like to sleep in my basket during the day, with my bed teddy

P: Baskets are for babies! I like the cream couch during the day, on the back of the red couch during  the evening

M: Well I like my basket and I like the red couch too beside Glitter or on her knee

M: On Glitter’s bed and under the duvet if it’s cold

P: Man! That duvet is nice! Only wimps go under the duvet though

M: Hugs, my bed teddy, playing with my mouses and empty chocolate wrappers, treats, kisses, going under the duvet, when Glitter gets home, looking in bags, watching the washing machine and jumping on all the clothes when they’re hung up, taking my time with food and leaving some for later, jumping up to the top of the kitchen units, being brushed and sleeping

P: Food, running up to the top of the curtains [when Glitter’s not looking], sitting on top of the red couch, beating Missy to the empty chocolate wrappers, going behind the TV, eating Missy’s food [well, she’s stupid for ‘leaving it for later’], looking in bags, ripping up paper, sneaking in to the bathroom, when Glitter gets home… and I LOVE food

M: Being told I’m the Baby – I’m not a Baby, I’m just smaller, I hate when Pinky – sorry Pinkypoo, hehe – steals my food, being woken up or told to get down from the high places in the kitchen or when Pinky the  bully steals my mouse or chocolate wrapper when I was playing with it and I don’t like when new people arrive, people I don’t know, I get big scared

M:  Oh! Oh! I hate  that hoover thing as well.. At least I can hide behind the couch when it’s on

Best thing about living with Glitter?

One response to “Meet the Glitterati”